By Rafal Borek, Home of Technologies.

Portugal is renowned for its weather, wine and food, and now, thanks to our host KNX Portugal, and the excellent college facilities at the ATEC training academy in Lisbon for anyone interested in KNX and building automation, I have even more good impressions of the country.

The conference to introduce ETS5 to representatives from KNX training centres around the world was organised by KNX Association, and was held 8-9 May. More than 50 delegates were present.

The Limitations of ETS4

As everyone in the industry knows, the programming tool for KNX for a number of years now has been ETS4. When it first came out, version 4 of ETS treated us to quite a few surprises, some joy and a few sleepless nights! We would occasionally lose a backup, and sometimes have to restart the program or the computer. It was an exciting time to say the least, but after the third update, everything settled down and we moved on.

Over the years, training centres from across the world have been giving our colleagues in Brussels feedback about different problems and bugs, and the association has always responded in a timely manner with updates etc.

The biggest issue however, was always the saving/exporting of the project or database. ETS4 is based on SQL libraries from Microsoft Windows which, in my opinion, has always been its Achilles Heel.

In response to growing demand for a more flexible and future-proof solution, KNX Association has created a new version of ETS, namely ETS5. ETS5, the beta version of which is was officially unveiled at Light+Building in Frankfurt, has been designed to allow the quick, simple integration of wireless KNX components. In addition, database management has been considerably simplified, and a new dongle offers greater flexibility in handling projects.

ETS5 is not due for release until October 2014, but at the conference, we were given an introduction to the new software, and the chance to test it. 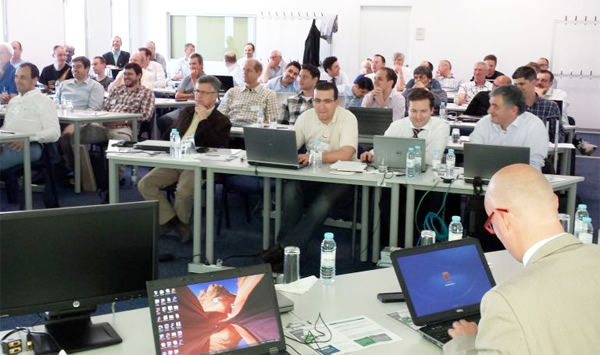 So far, ETS5 has been checked on most Windows versions and virtual boxes. The new layout seems to be more intuitive and direct, with all functions accessible from the top menu bar. There are major improvements to the settings, especially in organising shortcuts and online libraries. The Communication feature has been completely removed from the settings and is now a permanent option in the bottom menu.

For me, the most important improvements however, are those associated with how projects are saved and how SQL libraries are used. One key change in this respect is the absence of a database. This speeds up the import and export of data, and means that there will be no more problems with incompatibility of the backup with the new version of SQL, as now we save only the project and this will include all essential information. This will not only reduce the time taken to save your work but will minimise the number of report pages which you need to print for your customer manual.

ETS5 is more intuitive and direct to use and will save you time in programming projects. Numerous improvements have been made to the IT system environment, simplifying installation and making ETS work faster. ETS5 is a major advancement, and a big step forward in making your project data future-proof in the same way as KNX Bus installations and components are. In fact I am so impressed with ETS5 that I think it will fast gain as much of an impressive reputation in the building automation world as Chanel No5 did in the world of glamour!

Rafal Borek is the Managing Director of Home of Technologies (HoT), a KNX training centre, and KNXShopOnline.co.uk, an online store for KNX products. For more information on the HoT Technology Training & Distribution Centre, email office@homeoftechnologies.com or see the websites below.